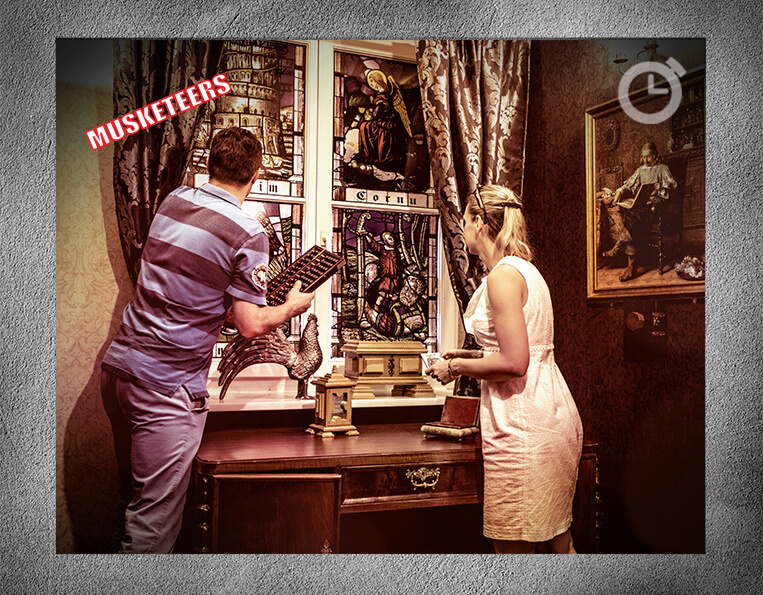 The Musketeers room is a true gem among the Room Escape Warsaw games. In a 6 digit scale of difficulty, it has been marked as a six, and the average time of escape is 58 minutes. The riddles that are waiting inside will peak the interest of anyone, no matter the age or sex.

The lovers of France and Paris will definitely be amazed by this room, as those are the places where the action takes place in. It is yet another room in which the décor fully embodies the spirit of the epoch in which the game is set. The players that will choose to escape from this room will be transported into the times of cardinal Richelieu, and will stay there for about 60 minutes. This room is an ideal proposition for the enthusiasts of historical sceneries.

The players that will decide to take up the challenge of this room will have the chance to become the famous quartet. Athos, Porthos, Aramis and D’Artagnan have to thwart the plans of cardinal Richelieu, who wants to destroy the world’s order. The cardinal, who is struggling to gain influence in France (it is the year of 1625, Louis XIII is sitting on the French throne), will not hold back from anything. One of his ideas is to… cause a war with England. To achieve this, Richelieu decides to steal the most precious jewels of the English king. The success or failure of this intrigue depends on you. Focus, maybe you will be able to influence the world’s history!

The players have to gain access to the chambers in which the jewels have been hidden, find the stones and then steal the precious gems. The task is an extremely risky and responsible one.

In this room the players will have to showcase their skills of working under the pressure of time. Since that’s how the musketeers worked, teamwork is very important here. The players have to act according to one rule: one for all and all for one. Besides, you have to work quickly but prudently, cautiously but courageously! The skill of predicting outcomes will also come in handy – a chain of traps awaits for the daredevils. Remember that one door may open yet another door.

The dauntless that manage to complete this task will be celebrated by the common masses. It may be that they will ensure peace all over Europe and the whole world. After dealing with this task you will be called the most noble defenders of truth and honour. It is worth taking up the challenge and taking part in the game in the Musketeers room for such a distinction. The prepared riddles will definitely satisfy and interest everyone, no matter how many times they played in the Escape Room Warszawa® rooms.