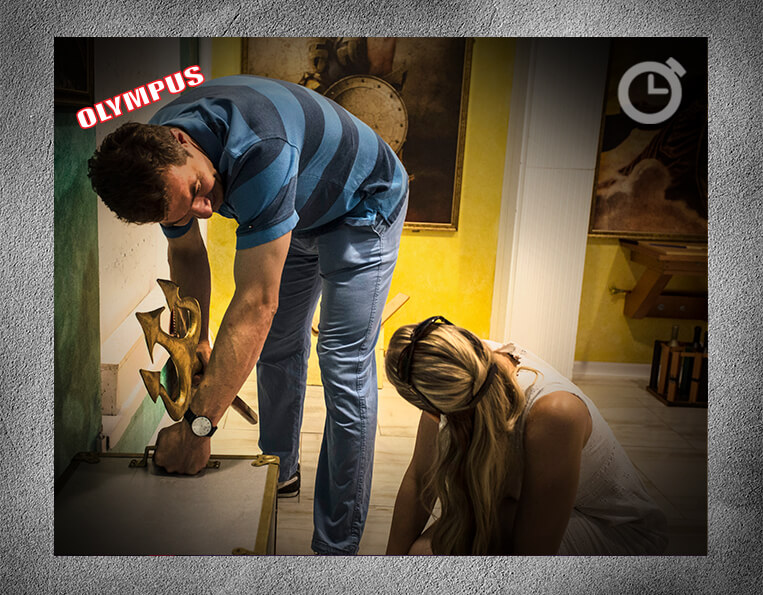 Olympus is an ideal suggestion for the lovers of ancient Greece. The players will have the chance to meet the residents of Olympus right after the end of Olympic games. The gods have just finished celebrating the close of athletic competition. The responsibility of taking care of appropriate drinks to celebrate the Olympic competition fell into the hands of Dionysus. The habitants of Olympus and Hades spent time drinking the wines from Dionysus’s winery. They had a fantastic time and godly terpsichorean pairs ruled the dance floor.

However, the time of excellent fun of the gods was counted. Their enemies decided to use the fact that the gods and goddesses were distracted to sneak in and steal their attributes. Without them the residents of Olympus are not able to successfully perform their roles. The future of the inhabitants of the whole ancient world is now in the hands of the team that will decide to play in this room.

The struggles in the Olympus room last 60 minutes and have been scored as 5 in the 6 digit scale of difficulty. That means that in order to deal with the chaos on the mount Olympus, you will have to reach the peak of your abilities. Full commitment to the job will be required.

There is one more important thing: the consequence of the happenings on Olympus is not only chaos on the hill, but also in the whole world. A great responsibility rests on the players’ shoulders. However, a great prize awaits for those who carry through the challenge. Firstly, the gods will be undyingly grateful and the players will gain the glory of heroes. Secondly, they will have the chance to steal, and then taste the godly nectar and ambrosia that provide you with inhuman strength, supernatural power and, above all, immortality!

To return the world’s order you will have to travel through the Styx river, defeat Cerberus and deal with the almighty Zeus. All those challenges are being taken up in a mythically furnished interior with an atmosphere that takes the players to ancient times. Expect complicated riddles and maverick solutions.

The players that decide to escape from the Olympus room have to surprise us with their skills of creative thinking, their ability to work in a team and to join the facts. In certain moments communication between the players will be vital, in others agility will be of grave importance. The special effects that have been set up by the creators of the room will astound even the pickiest contenders!

The fate of the world is in your hands! Man up and do the undoable.